Earth is in a constant state of flux, subject to tremendous pressures that can cause severe effects. While most events occur without any perceptible effects, some of them can wreak severe havoc on person and property. These are ten of the worst natural disasters that have occurred in the 21st century. 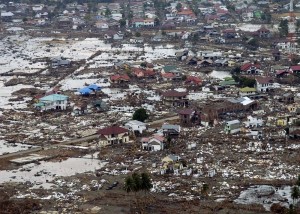 The earthquake that occurred in Gujarat in 2001 had a magnitude of 7.7. It lasted for more than two minutes and when the rubble cleared, it was discovered that more than 19,727 people lost their lives and another 167,000 were injured.

The Tohoku earthquake in Japan occurred on March 11, 2011. A powerful earthquake with a magnitude of 9.0, the earthquake also caused tsunami waves that towered as much as 77 feet over the coast and added significantly to the damage. The disaster caused damages of almost $235 billion.

The European heat wave that occurred 2003 was particularly devastating to France, where almost 14,802 people died as a result. All over Europe, the heat wave resulted in the deaths of almost 40,000 people, many of them succumbing to heat related conditions and the effects of drought.

The earthquake that struck Iran in 2003 had a magnitude of 6.6. It was estimated to have caused the deaths of 26,271 people, although some place the estimate at closer to 43,000. The earthquake also caused injuries to more than 30,000 people.

The heat wave that occurred in the Northern Hemisphere in 2010 affected several countries including the United States, Canada, Kazakhstan, Mongolia, and Japan. However, Russia was the country that was hardest hit. All told the heat wave caused the death of more than 56,000 in the countries affected.

The Sichuan earthquake that occurred in 2008 had a magnitude of 8.0. The earthquake caused widespread damage to person and property, and resulted in the death of more than 69,197, with 374,176 injured.

Myanmar was heavily hit by the Cyclone Nargis on May 2, 2008. Considered the country’s worst natural disaster, the cyclone caused the deaths of more than 146,000 people and injuries to thousands of others.

It was in 2004 that an earthquake occurred in the Indian Ocean, but the bulk of the damage was caused by the resulting tsunami that struck Indonesia among many other countries. It is estimated that the tsunami caused the deaths of more than 230,000 people in 14 countries.

The earthquake that struck Haiti on January 12, 2010 had a magnitude of 7.0. The quake’s epicenter was placed near Leogane. Although the death toll was significantly lower than most other earthquake disasters, the resulting damage to person and property makes this one of the most devastating disasters in the 21st century.