Brahim Takioullah is currently the second tallest living person in the world. The world’s number 10 in the top 10 tallest men who ever lived was born in Morocco in 1982. His height is linked to a tumor that on his pituitary gland.
9

Don Koehler was born in 1926 in Denton, Montana. He was growing normally until the age of 10 when his height begun to increase at an alarming rate. He suffered from Kyphosis and died in 1981, aged 55.
8

Vikas Uppal was born in Haryana, India, in 1986. The height of the Indian giant is often contested by various sources. The Guinness World Records never measured his height during the short time he lived. Uppal’s height is officially regarded to have been 8ft 3in though some sources put it as high as 8ft 10in. He died in 2007 after unsuccessful attempt by doctors to remove his tumor.
7

The seventh tallest man to ever live was born in Iowa, United States, in 1897. He suffered from a rare ailment referred to as eunuchoidal infantile gigantism. Some sources claim that he was much taller at the time of his death as the recorded height was taken when he was 18 while he died aged 23.
6

Sultan kosen is currently the tallest living person in the world and the sixth tallest person who ever lived. Just like others on this list, Kosen’s height is due to a pituitary gland tumor. However, unlike others, his growth was successfully stopped by doctors in 2012 following the removal of the tumor affecting his pituitary gland.
5

Edouard beaupre was born in the Canadian province of Saskatchewan in 1881. He dreamed of becoming a cowboy but this was not to be as he grew so strong that he lifted horses at only 17 years. The world’s fifth tallest man ever joined circus to play the position of a strongman. He died in 1904 after suffering from Tuberculosis and pituitary gland tumor.
4 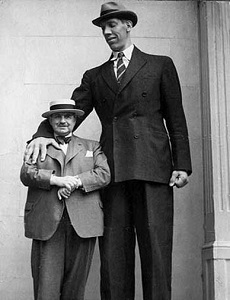 Vaino Myllyrinne was born in 1909 in Helsinki city, Finland. By 21 years, Myllyrinne had attained a height of 7 ft 3in. He experienced a second burst in growth in his 30s and continued to grow until his death. He served with the finish forces and is widely regarded as the tallest soldier in history. He also holds the record as the person with the widest hand span to ever live.
3

John F. Carroll was born in 1932 in Buffalo area of New York. His growth rate increased immensely upon attaining the age of 16 years. He continued to grow until his death in s1969. It is reported that at some point, he gained a whooping 7 inches in months! He was diagnosed with acromegalic gigantism, a disease that caused him to suffer a lot.
2

John William Rogan takes the second position in the top 10 tallest men who ever lived. He is also the tallest person ever of African ancestry. Rogan was born in Tennessee in 1868. He gained height rapidly upon attaining the age of 13 years. He suffered from a severe form of ankylosis, a disease that caused him a lot of problems including preventing him from walking or standing and eventually led to his death.
1

Many reputable sources agree that Robert Wadlow was the tallest man who ever lived .He was born in Illinois in 1918. His height increased immensely because of a condition that enlarged his pituitary gland, resulting in the excess production of human growth hormone. The condition made him grow throughout his life and caused him a host of problems including difficulties in walking and lack of sensation in the feet. Doctors had no treatment for the condition at the time.