At the time of its opening in 1996, this was the tallest roller coaster and in 1997 and it was also ranked as fastest but in 1997 its spot was taken over by the Tower of Terror in Australia.
9

With a rail that is 3,500 feet long and reaching speeds of 81 MPH, this coaster travels through both the LaQua Building and a Ferris Wheel with no centre.
8

This ride is located in a park just outside of Toronto and is the first one to be made by Bolliger and Mabillard who are now renowned for their exceptionally smooth rides.
7

This crazy ride does not have any inversions or other gimmicks; it merely relies on sheer speed and g-forces, to intimidate its passengers.
6

This ride uses an elevator cable to lift the trains to the top of its 310 feet and on the way down, the train reaches speeds of 93 MPH.
5

Due to possible earthquakes, more steel had to be used to build this ride than is usually used for coasters, bringing the cost of building it to more than US$50 million.
4

When this ride opened in 1997, it was the fastest and tallest in the world. It can attain a speed of 100 MPH and, in places, causes its passengers to undergo 4,5G of pressure.
3

In 2011 this ride went through an upgrade making it higher and faster. The ride is unusual in so far as it has the cars reverse out of the station.
2

This ride has 1,000,000 riders per year and is so tall, to avoid being an aviation risk, it has to have Strobe lights half way up and at the top.
1 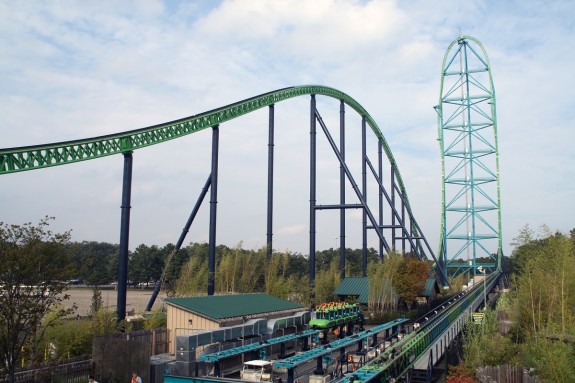 Reaching a top speed of 128 MPH in 3.5 seconds this was the fastest ride in the world until it was overtaken by the opening of the Formula Rossa in 2010 but still today, remains as the tallest roller coaster in the world.