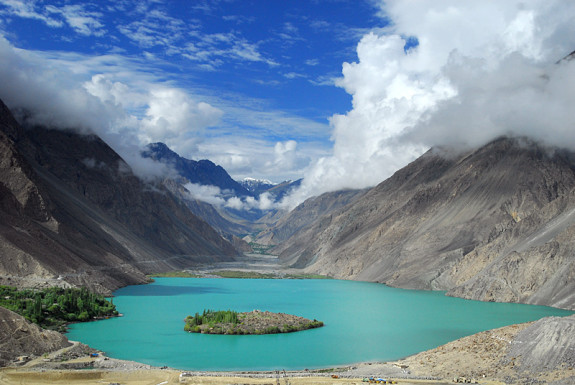 Here is a list of what are generally considered to be the top 10 most beautiful places in the world:

1. Skardu Valley, Pakistan – Located in the Baltistan region, this valley covers an area of 26,000 square kilometers and is said by many to resemble their visions of how heaven would look.

2. Shangri La, Pakistan – Located among some of the highest mountain peaks in the world, this is the place that dreams are made of. Its beauty and tranquility has achieved almost legendary status.

3. The Great Barrier Reef, Australia – Listed as one of the natural wonders of the world, this is the largest coral barrier reef on the planet and in places can provide some of the most beautiful sights. This 300,000 square kilometer reef is home to 4,000 types of mollusks and 1,500 species of fish.

4. Iguazu Falls, Brazil – These falls are actually located at the point where Paraguay, Argentina and Brazil all meet but after the falls, the river continues to run through Brazil. Neither the tallest nor most powerful of waterfalls in the world, it is questionably the most beautiful. It was this combination of falls that were featured in the movie ‘The Mission’ starring Robert DeNiro.

5. The Grand Canyon, United States – Over a six million year period, the Colorado River etched a canyon through 277 miles of the Arizona countryside that in places has a width of between 4 and 18 miles.

6. Taj Mahal, India – This mausoleum is made from white marble and is considered by most to be the most beautiful example of architecture in the world. Located in Agra, it was built by Emperor Shah Jahan in memory of his 3rd wife Mumtaz Mahal.

7. Machu Picchu, Peru – Built in the high Andes Mountains of Peru, this site stands as a magnificent monument to the past power of the Inca. No longer is it considered as the religious site that it once was but is now thought to be one of the ‘must see’ locations in the world.

8. Canadian Rockies, Canada – The Rocky Mountains located in Western Canada have a total of five National Parks from which it is possible to climb the peaks or just look in awe at the majesty of these great mountains. The views from these national Parks can equal the best mountain scenery any where in the world.

9. The Pyramids, Egypt – These magnificent ancient monuments have stood for thousands of years as testament to the greatness that Egypt had once attained. Although the great Pyramids at Giza are the ones that attract the most visitors, over 100 pyramids have now been found in Egypt.

10. Rio de Janeiro, Brazil – On the coast of Brazil, the mixture of the long ideal beaches overlooked by the giant Statue of Christ the Redeemer, makes this a picture perfect setting for visitors.