The current growth of the fast food industry is astounding. From the days when fast food places were seen as mere joints where customers got served with food without having to wait to the days when fast food menu items began to be standardized. Nowadays, food at these joints is cooked in advance and kept fresh for a while before being sold. Here is the list of the 10 largest fast food chains in the world;

This pizza restaurant chain is the third largest pizza chain in the US. It was founded in 1984 and has taken the world by storm. Papa John’s has grown tremendously and now boasts of having 4,200 similar fast food restaurants around the world. Out of this, they have around 2,600 restaurants located in the US.
9

The restaurant was opened in 1940. Dairy Queen Headquarters is situated in Edina, Minnesota. They are best known for their hamburgers, hotdogs, frozen yoghurt, and ice-creams. The restaurant boasts of having 6,321 stores around the world.
8

This international restaurant was found in 1950 and has gained prominence throughout the world with their two main products; coffee and donuts. Their main competition in the industry is Starbucks (coffee) and Kripsy Kreme (doughnut sales). The store has over 10,083 stores around the world.
7

Domino’s was found in 1960 and remains one of the world’s best pizza restaurants chains. In America, Domino’s is second to Pizza Hut. The restaurant owns about 10,300 outlets throughout the world. On a daily basis, they deliver more than a million pizzas.
6

The fast food industry has greatly evolved and Burger King is part of the evolution. It was originally found in 1953. Just as the name suggests, it supplies burgers throughout the world. They produce big meaty burgers to target men aged between 18 and 35. They boast of having 12,700 outlets in 73 countries.
5

The World’s largest coffee restaurant chain was found in 1971 and boasts of having about 20,891 stores operating in 62 countries. Most of their stores are located in the US with about 13,279 stores followed by Canada which has about 1,324 stores.
4

Among the many pizza fast food places in the US, Pizza Hut stands out as the largest. It was opened in 1958 and besides pizza; the restaurant also sells side dishes such as salads, garlic bread and pastas. They boast of having 11,139 outlets in 95 different countries.
3

This fast food restaurant that is famous for producing healthy products such as submarine sandwiches and salads. The chain of stores was found in 1965 and is owned and run by the Doctors Associates, Inc. As a single restaurant chain, Subway is the largest with about 39,747 restaurants in 101 countries.
2 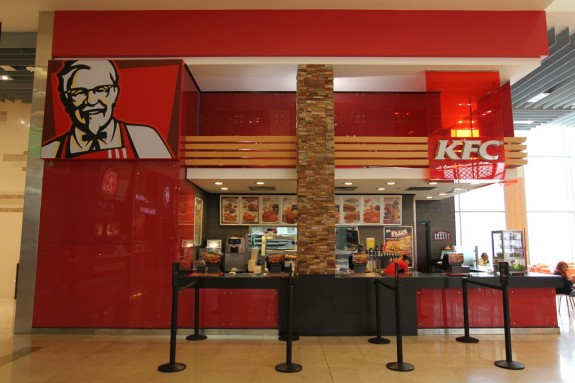 Founded in 1930, Kentucky Fried Chicken was found by Colonel Harland Sanders. It’s known as the world’s best chicken restaurant whose recipe is not up to date known. It has about 18,000 outlets in around 120 countries.
1

Topping our list of the largest fast food restaurants in the world is McDonald’s. It was found in 1940 and boast as being the World’s largest hamburger fast food chain with about 34, 492 restaurants in 118 countries. It serves about 69 million people per day.