A polar vortex otherwise known as an Arctic or Antarctic Cyclone can be defined as a hurricane type of weather system which tends to remain above the earth’s pole. It can occasionally stray from its perch to cause fluctuations in parts of the world that are populated.
The CNN gave a polar vortex forecast on what exactly is happening this week in America. It is expected that almost half of the US residents will experience temperatures below zero degree. So far, the losses brought about by the polar vortex are countless. Reports from FlightAware have ascertained that around 3,000 flights have so far been cancelled across the country because of the poor weather conditions. 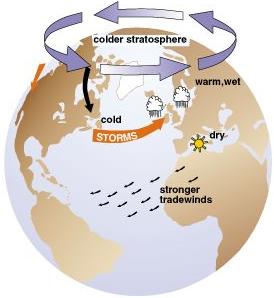 The sudden Polar vortex collapse has stunned many people who are now eager to find out what will happen after that. Here are some 10 facts you probably did not know about polar vortex.

10) More than 187 million people have been affected

The polar vortex forecast has statistically revealed that over 187 million people across the US have been affected by the Vortex.

9) Too cold for Penguins

Currently, the freezing temperatures have even proved to be too harsh for polar bears and it is reported that Penguins found at the Lincoin Park Zoo were locked indoors.

The deep freeze will expose Americans to cold temperatures that will even be colder than Mars. Better be prepared.

The polar vortex forecast dictates that you dress appropriately for the harsh weather conditions which are expected to take a toll in America.

6) The vortex may be an example of global warming

Over the years, the environment has been exposed to harsh human effects. It is believed that the exposure to these conditions is beginning to take a tall on the world evidenced by the deep freeze that is grapping America.

It is believed that the climatic changes have played a huge part in polar vortex. The decline of the sea ice is believed to have steered Hurricane Sandy.

The city of Indianapolis has come out strong banning driving during the hard hit vortex all in a bid of trying to combat the harsh conditions. Other measures which have been taken include the banning of flights and shutting down of schools.

One of the beneficiaries of the vortex was the script writers of the movies ‘ The Day After Tomorrow’. The plot of the movie is basically based on the vortex and tries to give a perspective on the actual occurrences.

2) The Vortex rarely travel away from the poles

Unlike other typical cold weather, the polar vortex only appears on either the north or the south poles and is known to stay there. Concerning this vortex, it originates from the Arctic. The vortex is elongated at its two centers; one over Siberia and the other over Baffin Island.