Although in October 2013, Spirit Airlines had two incidents that required the plane to land early, no lives were lost so they don’t make this list. Nor does the recent missing Malaysian Airlines flight MH370 but not because the air crash investigation is not complete but because even if the air crash is confirmed, it still only had 227 passengers on board, which even added to the 12 crew which makes 239 people, does not qualify for it to be in this list of the top 10 deadliest air crashes so far. 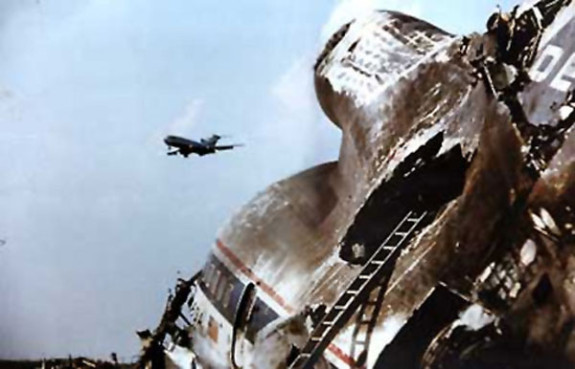 This aircraft was shot down by the Soviet Union because they say it flew into Soviet airspace without permission. After an investigation the International Civilian Aviation Organization (ICAO) confirmed that crew error had taken the plane off course.

This crash was due to a terrorist bomb being placed on the plane. Two Libyans have since been convicted of the terrorist act.

This is the deadliest airline crash to take place on US soil. An engine fell off this DC-10 as it was taking off from O’Hare airport.

This was an Iranian Airbus that was shot down, mistakenly, by the USS Vincennes during the Iraq – Iran war.

This flight, having experiencing smoke after take-off, actually managed to land back at Riyadh airport but due to it rolling down the runway, most people had died of smoke inhalation before the rescue teams could arrive.

This Air India 747 was subject to a Sikh terrorist attack en-route from Toronto to Bombay. Another flight, this time to Tokyo was planned for the same day but that bomb blew up in the cargo department at the airport.

Due to a cargo door falling off, this Turkish DC-10 crashed in woods just north of Paris.

This Saudi Arabian Airlines 747 collided with a Kazakhstan Airlines flight KZK 1907 whilst it was approaching a landing at Delhi Airport. The Saudi plane had 312 people on board and the Kazakhstan plane had 37.

The pilot of this plane soon lost control after take-off and although trying , but failing, to land first back at Tokyo Airport and then a US military base, it eventually crashed into mountains.

This is the deadliest air crash in history. Due to a misunderstanding by the Pan Am crew and haste by the KLM crew, these two 747 managed to collide on the runway of a busy and over used airport.