Sea ports play a major role in world trade and as the international trade increases, so does the need for the ever increasing size of these ports. From the list of these, perhaps the 10 biggest in the world, it can be seen that a lot of trade is done from south east Asia, mainly China but the size of other ports in the world are also increasing and ones like that in Dubai may soon take a place on this list. This list is of the biggest and busiest seaports in the world, taken mainly by the number of containers that they deal with on a regular basis.
10

This port makes the list mainly through the transportation of the countries coal between the north and south, accounting for 50% of China’s coal movements.
9

Connected to over 400 other ports located in 200 countries, this port which is situated on the Haihe River, is one of China’s largest.
8

This port earned its place on this list when the ports of Ningbo and Zhoushan merged and may move up when a planned extension is completed in 2014.
7

This Chinese port is located facing Japan and South Korea, the two leading ship building nations. The port makes use of its natural port and is linked to over 350 ports in over 130 countries.
6

Busan is not only South Korea’s largest port; it is also its second biggest city and continues to grow along with its countries international trade.
5

Although only 5th on this list, Rotterdam is the largest port in Europe and accounts for a lot of its international trade with the rest of the world.
4

As well as dealing with international trade from within the surrounding districts, this port also deals with trade within the River Pearl delta, making it the busiest port in the southern part of China.
3

This port also makes use of a natural port in the South China Sea and has played a major role in the advancement of the province over the years.
2

Connected to 600 ports in over 100 countries, as well as dealing with an estimated 1/5th of international containers, it also is estimated to deal with 50% of the world’s oil that is transported by sea. This was the largest port until 2010 when it lost its title.
1 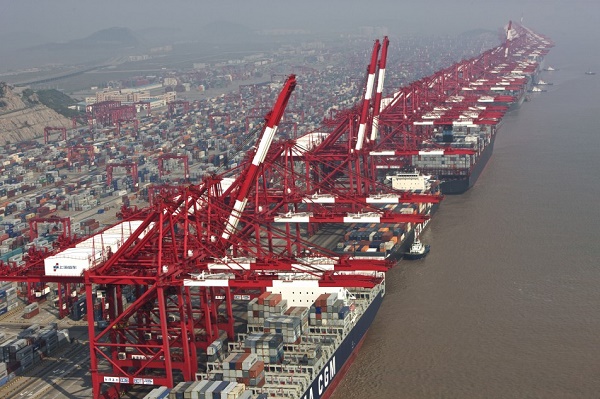 Taking over the title as the world’s largest port from Singapore in 2010, it has held its title since. Located on the Yangtze River, this port, deals with the trade from the provinces of Jiangsu, Henan and Zhejiang which was instrumental in the development of the city of Shanghai. The port’s importance is probably due to its strategic placement for trade with both the Yangtze River and the East China Sea, providing a very viable maritime route.