Since 1598, when the They say watching a game on a television set doesn’t really give you the same feel as the one you get being at any one of largest stadiums in the world. We’ve put in an effort to compile a list of largest stadiums and further refined it for this post to top 10 biggest cricket stadiums in the world. Cricket is a well-loved sport not only in Europe but also in the rest of the world. When watching the Cricket World Cup, the experience is always best when shared with thousands of other fans in the biggest stadiums all over the world. However, the concentrations of the largest cricket grounds are in the countries of Australia and India. The best places to watch a championship game are at the following stadiums: 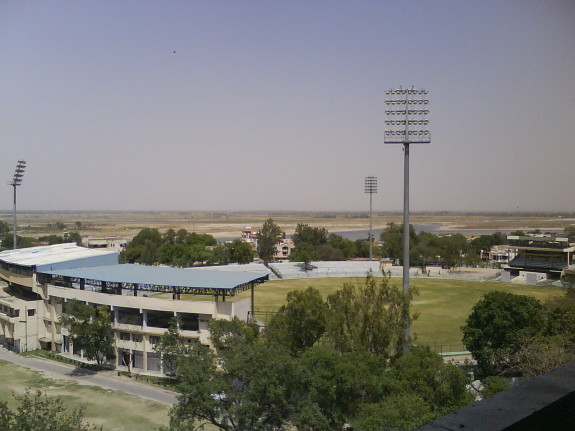 Both located in India, these two stadiums can hold as many as 45,000 fans at a time. The Captain Roop Singh Stadium has been host to 10 One Day International matches so far with the first match being played back in 1988. On the other hand, Green Park Stadium is the one and only cricket stadium (though used for multiple purposes at time) in the Indian state of Uttar Pradesh. These stadiums are located in Gwalio and Kanpur respectively and rank at number 10 on our list 10 largest cricket stadiums in the world.

The 9th spot still goes to India, courtesy of this stadium located in Visakhapatnam. The grounds can hold as many as 46,000 spectators and is the home of the Andhra Cricket Team, the Indian Cricket Team, and the Deccan Chargers. Built in 2003, the stadium has so far hosted only 5 One Day International matches but has been a host to many local league matches including the famous Indian Premier League matches. It is also one of those few Indian cricket stadiums that have the capacity to host day and night matches.

These four stadiums are all found in India, more particularly in Kochi, Pune, Hyderabad, and Ahmedabad. All of them are ranked in the seventh spot as each of them carries the same capacity of 55,000 fans. Local teams tend to play in these stadiums.
6

No doubt Indians are crazy about Cricket, almost half of the world’s largest cricket stadiums of the world are located in India. Not only they are huge, they also have one of the most amazing and electrifying atmospheres during international matches. Although it ranks sixth here, the MA Chidambaram Stadium is actually tied in the 5th spot with Pakistan’s Gaddafi Stadium. Located in Chennai, India, this is where the Tamil Nadu Cricket Team and the Chennai Super Kings play.

Recently added to the big 4 along with India, Australia and England, Pakistan is now one those nations that have marked their spot in the cricketing world. The Gaddafi Stadium is located in Pakistan, more particularly in the city of Lahore. It can hold as many as 60,000 spectators and is the home of the Pakistan cricket team, the Lahore Eagles, and the Lahore Lions. Not only this, it is also home to the Pakistan Cricket Board’s head office along with National Cricket Academy of Pakistan.

Still located in India and also known as Shaheed Veer Narayan Singh International Cricket Stadium is the home of the Delhi Daredevils. The stadium is the biggest in Naya Raipur and second largest cricket stadium in India can hold as many as 65,000 fanatic cricket viewers at a time. It is also another entry to the world’s few stadiums or sports complexes used for multi purposes. The Raipur Stadium has the capacity to not only cricket matches but also host short marathons.

The ANZ Stadium is located in Australia and is the biggest cricket ground in Sydney. It can hold as many as 83,500 people however, it was originally built to plan and host around 110,000 spectators. Due to some regulations by International Cricket Council, the ANZ Stadium or Stadium Australia had to be restricted to a seating capacity of 83,500 people. The teams that play here are the Australia National Team and the New South Wales Blues.

As far as crowd capacity is concerned, the Eden Gardens in Kolkata, India ranks second in the biggest cricket grounds list. The stadium can hold as many as 90,000 people at a time and is home to the famous celebrity owned local Indian Premier League Cricket team; Kolkata Knight Riders. The stadium was built in 1864 and is said to be the most iconic cricket stadiums in the world due to its history and some of the most nail biting matches being played here.

There could not be another name coming to one’s mind when talking about top 10 largest cricket stadiums in the world. The Australians are indeed, one of the biggest fans of cricket in the whole world. And it is seen by the capacity of their home team’s cricket stadium. The MCG or Melbourne Cricket Ground can accommodate more than 100,000 fans and spectators. The stadium is home to the Australian National Team, the Victorian Bushrangers, and the Victorian Spirit.

One Reply to “Top 10 Biggest Cricket Stadiums in the World”