Paris. It is a city with a haunting history, and is a frequent setting for literature, TV, and film. Paris is also known by many names: City of Lights and Fashion Capital of the World are just two of them. It’s one of the most visited cities in Europe. When you wander the halls of its many museums, you’ll run into famous works of art like the Venus de Milo, and the original Mona Lisa! Many travelers wish to visit at least once during their lifetime. Unfortunately, globetrotting is not cheap – and neither is Paris itself. Do not feel defeated! It is extremely possible to not overspend during your visit.

Book a vacation package for your airfare and hotel

We all know flying isn’t cheap. Neither is staying at a hotel, especially when traveling overseas. There are many travel companies – such as Expedia and Kayak – that are great resources for planning your trip right in the comfort of your own home! A huge benefit for booking a package deal is not having to pay separate taxes or fees: these are included in the prices that are given to you on the website. For example: if you want to reserve a flight for two adults in the coach section on a Delta/AirFrance plane that would leave Detroit, MI and land at the Charles du Gualle airport in Paris for a three night stay, the estimated total cost (depending on the day of week and time of day you leave) through Delta’s website would be around $3826.20 – and this is JUST for the round trip flight!

Next, when you want to consider the hotel, you can review a list that range in ratings from one to five stars. It is highly recommended that you read the reviews from previous guests of the hotel so you can have an idea of what to expect from the staff and services that are offered. Now, say you want to stay close to downtown Paris and the Eiffel Tower, all while not breaking the bank in the process. The Select Hotel – Rive Gauche costs on average $648/night. If you’re staying for three nights, that total would be $2140.93, JUST for the hotel! Combine that with your airfare, and the total is $5967.13 – that’s quite a bit for a four day, three night stay! If you were to book the same vacation as a package deal through Expedia for the same amount of days with the same hotel and two round trip airfare tickets (not necessarily with Delta), the total including taxes and fees would be $4,185.19 – a savings of $1784.94! You can use those savings to enjoy the rest of your adventures in the City of Lights.

The average meal at a café in Paris for two folks is around 30 Euros. If you have a day of exploring ahead of you, grab your free breakfast at the hotel and stop at the local super market or Monoprix (it’s the city’s version of a Walgreens with a grocery store) for some light snacks and bottled water. Eat more protein in the morning and you will be full for the majority of the afternoon; plus you’ll be so busy taking in the sights you won’t even think about food!

If you do go out to lunch/dinner, don’t order soda 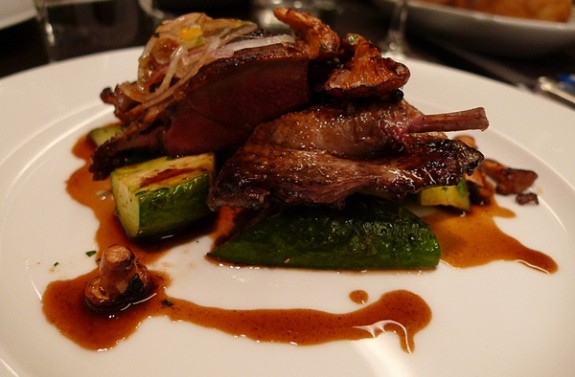 Sodas cost around 4 Euros each, and refills are not free. It is best to order water, although some cafes will charge if they serve it in a fancy glass bottle as opposed to a pitcher.

Every bank and every credit card company charges a different amount for fees if your card is used at international locations. Fifth Third Bank charged nearly $10 on top of the regular cost of the items being paid for, while Huntington National Bank charges around $2 or less. Also, some stores – like Sephora – will give you the option to pay in Euros or USD when you swipe your card. The USD loses value when exchanged for Euros, so that decision of which to charge to your account is totally up to you.

As opposed to city cabbies, privately owned taxi services charge a flat rate just to have passengers get into the vehicle. For example, if you land at Charles du Gaulle airport and are going to be staying downtown, a general cab fair should be around 65 Euros. However, with a privately owned taxi, the average flat rate is 40 Euros. Combine that with the mileage and you’re easily looking at 150 Euros! There is an airport shuttle bus that you can use, or take the blue line on the Metro – passes are around 9 Euros per rider.

Buy store-brand batteries for your electronics

Don’t fool yourself into thinking that CVS or Walgreens brand batteries work any less than Energizer or Duracell – they work just as well, and cost about half as much! If you’re lucky enough to catch a sale, some of these locations will have a Buy 1, Get 1 Free deal going where you can get double the amount of batteries for the price of one pack from the name brand. Go for it!

For as massive as it is, The Louvre only costs 12 Euros per guest for a one-day pass. If you’re an art fanatic, this particular museum will give you hours of photographic opportunities with historical pieces such as the Venus de Milo and the original Mona Lisa! The Pantheon is only 7.50 Euros per guest. If you’re not easily spooked, be sure to go underneath the church to check out the crypts – many famous philosophers and writers were laid to rest here. You could see the tombs of writers Victor Hugo (known for “Les Miserables” and “The Hunchback of Notre Dame”) and Alexander Dumas (“The Three Muskateers), as well as the resting place of Louis Braille, who created the Braille system for the blind. There are about a half dozen other museums to check out during your visit. Also, both are within walking distance of the Latin Quarter, and the Pantheon is right around the corner from the Pantheon. Be sure to capture a photo of the Eiffel Tower from its entrance!

Phone apps like Google Maps are a wonderful tool for navigating Paris by foot. There are sidewalks all over the place. The best thing about walking is that you can go at your own pace – just be mindful of speeding drivers who might ignore the fact you have the Walk Now signal in the crosswalk! Walking is a huge money-saver during your Paris vacation, as long as you stay in an area (like the aforementioned Latin Quarter, near the University of Paris). If you walk along the Sienne River, which is the scenic route, it is just over three miles in distance and takes around an hour to get to the Eiffel Tower. You can cut directly through the city on the walk back, and cover around six miles all together. Make a day of it! Pack a picnic lunch to enjoy in the park next to the Eiffel Tower, which is free to enjoy if you don’t walk to the top.

Buy your postcards in Paris, send them when you get home

It may seem silly to send a postcard from your local USPS location, but why spend more than the $.44 (cents) USD which may include international charges as well? Also, be weary of where you buy the postcards. Some street vendors sell them for 20 EuroCents while stores sell the same postcards for the same size for 1 or more Euros.

Print your photos at home

Most stores that allow you to print your photos from an SD card charge anywhere from $.10-$.19 (cents, USD). Depending on how many photos you wish to print, and how much ink you’re willing to go through (black ink is always cheaper, and black & white photos tend to look more classy), you can purchase a packet of photo paper for around $7.99 USD and print around 30 photos. Since many of us use social media outlets like Facebook or Instagram to upload photos, printing photos at home will save you both time and money!